Web Services Framework for JBoss AS.

JBossWS > Blogs > A book on JAX-WS in WildFly and more...

A book on JAX-WS in WildFly and more...

It was last winter when I was offered to author a book on the Web Services stack provided by JBossWS / Apache CXF in WildFly. I eventually took up the challenge and invested part my spare time on writing the book.

To be honest, what really inspired me was the chance of finally being able to write down from scratch how I believe a user should approach the Web Services world and move on from the theory to real world usage scenarios.

As a matter of fact, throughout the years I spent contributing and leading the JBossWS project, I've often had to deal with users picking up concepts and code snippets from books here and there and then asking why they were not achieving what they expected in JBoss AS / WildFly. This opportunity looked like a way to eventually say "look, if you really don't want to read and understand the project documentation, here is a book that likely has all you need and nothing more" ;-)

The goal was probably a bit too ambitious, nevertheless I believe the result of my effort is definitely good.

So, if you want to get your hands on my JAX-WS book, it's currently available in electronic edition at itBuzzpress.com and on Amazon. Printed edition coming soon. 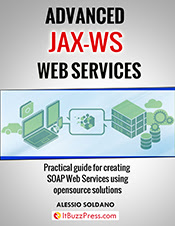 We use JProfiler for profiling